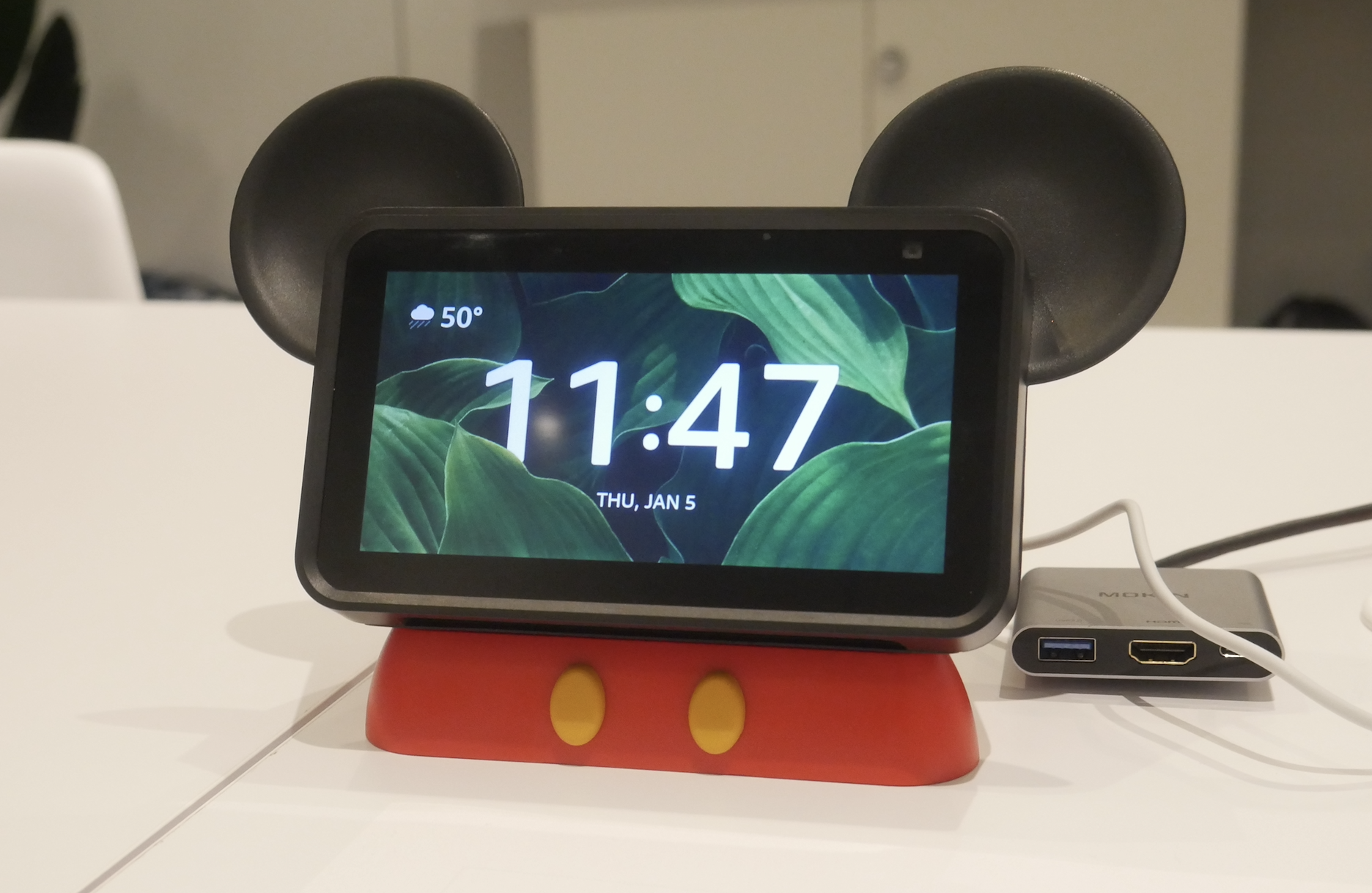 My kids are obsessed with taking to home voice assistants. Not a day goes by where you won’t hear either my seven-year-old or three-year-old ask Alexa or Google what the weather currently is, to play their favorite songs, or the answer to some random question about wildlife. I’m sure many parents can relate.Now, imagine if instead of Alexa answering your kids’ questions, Mickey Mouse, Goofy, and nearly two dozen Disney characters chimed in. Depending on just how much you love Disney, this will either give you that magical Walt Disney World feel or become the bane of your existence.At CES 2023, Amazon announced that Disney’s first home voice assistant, Hey Disney, will soon be available on Echo devices in the coming months via the Alexa Skills Store or as part of an Amazon Kids+ subscription. With a simple “Hey Disney!” the voice assistant interacts with kids, parents, and Disney Adults alike in many of the same ways you currently use the Alexa voice assistant, with some additional unique features like Disney Trivia and Star Wars soundscapes to name a few.Amazon and Disney provided Mashable with a hands-on demo of the home voice assistant at CES, which you can check out in the video below:

We were able to ask Disney basic questions like what the current weather is and have over 20 Disney, Pixar, and Star Wars characters like Genie from Aladdin or Olaf from Frozen respond. During the demo, we also heard an interactive story from Cars’ Mater and set a 30-second timer with the help of Donald Duck. The main voice assistant is called Disney Magical Companion and it leads the query before throwing it to a random Disney character.After experiencing the demo, I thought the most interesting feature wasn’t the voice assistant itself but how it’s going to interact with Disney’s MagicBand+. In case you haven’t been to a Disney theme park in the past decade, the MagicBand is basically a watch-sized wearable device that enables you to quickly enter the parks, skip the lines with Disney’s new FastPass system called Genie+, and more. It’s basically your big ticket to Disneyland and Disney World. There’s a premium version of the wearable called MagicBand+ that does all of the same things but includes interactive capabilities. For example, the MagicBand+ will light up when you pass certain statues at Magic Kingdom and when you tap the device, a voice of the character from the statue will interact with you.One major issue with the MagicBands, however, is that outside the parks…well, they’re useless. That soon won’t be the case. In our demo, when that timer set by Donald Duck went off, the connected MagicBand+ devices all lit up. According to Disney, the company is planning future integrations such as being able to play Disney Trivia with Hey Disney and multiple players tapping on their MagicBand+ in order to buzz in and be the first to answer.images-1.fill_.size_2000x1502.v1673295608 Hey Disney actually first rolled out late last year at select Walt Disney World resorts, like Disney’s Polynesian Village. (According to Disney, the company is aiming to eventually roll the voice assistant out to every guest staying in a Disneyland or Disney World resort.) However, the voice assistant found at the resorts is a bit different than the upcoming home version as it’s focused on answering park questions for Disney guests. And until this week, the only place you could try Hey Disney out was at these select Disney resorts.While not a Disney Adult, I am a bit of sucker for Disney. I grew up on the classics, read Marvel comics as a kid, and was once obsessed with Star Wars. I now have two children who love the characters, movies, and shows and I very much enjoyed how much fun they had on their first trip to Disney World this past summer. Yet, while the idea is rather cool, there are some areas where Hey Disney is rather lacking in execution. For example, users can’t pick a character they want to regularly interact with. It’s completely random and certain characters are only programmed to respond to certain prompts. Disney explained to me that the company didn’t want characters answering questions that wouldn’t make sense for them to answer. I get it, but being able to select a specific character for all prompts would make it much more fun in my opinion. Also, if a question is out of Disney’s purview entirely, Alexa will take over for Hey Disney (also understandable, yet disappointing). So, for better or for worse, users can’t ask Goofy to provide them with medical advice.Park guests who have encountered Hey Disney at the resorts have voiced some critiques and concerns about the device. Some have been disappointed that the “main” Hey Disney voice, the Disney Magical Companion, isn’t a beloved Disney character but a brand new personality.Other Disney guests have had worries about potential privacy issues, a concern often shared about voice assistant technology in general. Amazon tells Mashable that the resort version of Hey Disney doesn’t record guests’ information and voice recordings are not saved as users never personally sign in to the device. The upcoming at-home version will be similar to how Alexa works today, where customers have control of their privacy settings and voice recordings can be deleted at any time. The device only begins recording when users activate the voice assistant by saying “Hey Disney” or “Alexa” and the device lights up. Amazon also says users’ personal information is never shared with Disney.This Amazon-Disney partnership is the result of a new Amazon solution announced just two years ago, Alexa Custom Assistant. This allows companies to replace Amazon’s Alexa voice assistant with their own branded assistant on Alexa-powered devices. So, in case Disney isn’t quite your thing, maybe another brand you are a fan of will soon answer your questions instead of Alexa.