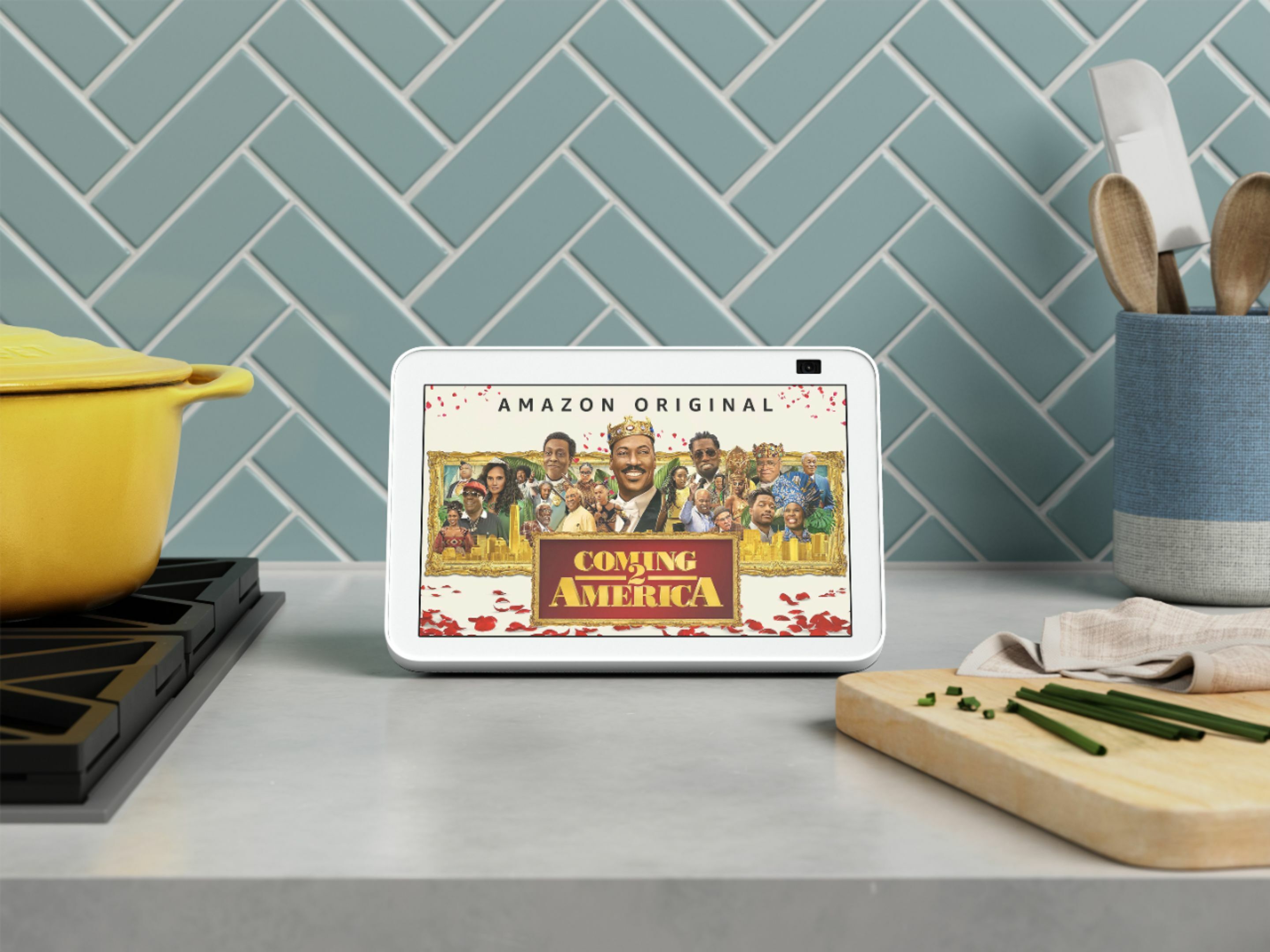 The Echo Show 8 (2nd generation) is a sleek, smart addition to the Echo lineup, boasting an 8-inch HD touchscreen, a super responsive auto-panning and zooming camera to keep you in focus during video calls, dual stereo speakers, and the ever-adaptive Alexa.As a central hub for your home, it really can’t be beaten, but it needs a little more work to be a good fit for the work-from-home crowd.

Large and in charge

If you’re familiar with the 1st gen Echo Show 8, you know it’s not exactly a compact device — and the 2nd gen Echo Show 8 is the same size, measuring in with an 8-inch screen and a 4-inch x 8-inch footprint. That could be a pro or a con, depending on what you’re looking to get from the device (and where you want to put it).I love the size for my kitchen because it’s nice to have a large screen there for recipes, and it’s a gathering area for the family where we can easily make video calls. On the other hand, it would be way too big for my desk — the Echo Show 5 would be a better option here.images-1.fit_lim.size_376ximages-2.fit_lim.size_376x If you plan to use your Echo Show for streaming, you’re going to want to spring for the bigger Echo Show 8 rather than the Echo Show 5. And because this device was essentially made for video calls and connecting, you want to put it somewhere where the household would naturally gather anyway. There are plenty of places that I could put it, but they’re not areas where we typically congregate.

Because of the kind of work I do (writing), I attend lots of online cooking classes and workshops. And one of my little pet peeves is having to move my laptop into the kitchen for these meetings so my phone’s not tied up.So, one of the features of the Echo Show 8 that I was most excited about was that it supposedly works with Zoom with essentially no setup required. I was super pumped to test out the feature with a cooking class. After a quick Google search, it was easy enough to get everything in place. I synced my Google calendar to Alexa, waited for the meeting time, and said the magic words: “Alexa, join my Zoom meeting.” And… she said there was no dial-in number so it was a no-go. I even generated some meetings of my own to try to test out the feature but none of them had a dial-in number either, so they all received the same message.I had that beautiful Echo Show set up all nice in my kitchen but still had to move my laptop into the kitchen for my class. Womp, womp. On the other hand, I like that the Echo Show 8 gives me helpful calendar reminders without intrusive notifications so I can easily see when my next meeting is.One of the new features of these 2nd gen devices is motion-activated Alexa routines, which could really be a game-changer for setting home office hours. Imagine a low-key instrumental playlist starting when you walk into your office while Alexa automatically starts reading your calendar. Nice.Note: From my understanding, the Echo Show 8 is the ONLY Echo Show device that can join Zoom meetings. So if that’s something that’s important to you, this is the one you want. I am anxiously awaiting a fix for the “dial-in” issue because it would make the Echo Show 8 a nearly perfect device in my eyes.

I subscribe to a meal kit delivery service that shares its recipe cards digitally. On that note, I created a routine to automatically open the browser so I can navigate to the meal kit website when I say, “Alexa, let’s make dinner.” It was nice to have Alexa set timers when I pop something in the oven, rather than setting it manually on the oven. And when I just need to pull up a recipe, it’s so much easier to use the Echo Show 8 than to constantly check my phone or run back and forth to my laptop. Maybe it’s because I spend so much time in the kitchen between work and feeding my crew, but I really feel like it’s where the Echo Show 8 shines. The smaller Echo Show 5 is nice, but it definitely wouldn’t be near as useful for looking at recipes due to its compact screen.Still, it’s way more than just a high-tech cookbook stand.

If you’re all about video calling, this is absolutely the Echo Show device you want. The camera is a significant upgrade from the 1st gen Echo Show 8, jumping from one megapixel to 13.During calls, the camera will pan and zoom automatically to stay focused on the people who are in the camera’s view — and that’s a huge plus for parents of squirmy kids and people who’d like to multitask on a video call instead of holding their phone in front of their face.images-3.fill_.size_2000x1336.v1624248049 It’s also so very easy to video chat with other Alexa devices in your household — just say, “Alexa, drop in on [so and so].” You can also use your Show as an intercom to relay messages to all the other Alexa devices in the house. It’s the dinner bell of the future.

With Alexa Guard mode, the device can interface with your existing security system, detect alarms and glass breaks, and automatically turn smart lights on and off. The Echo Show 8 (and other Echo Show devices, too) can also serve as security cameras.Even if you’re out of the house, all you need is a WiFi connection to check in on the house using the Alexa app and the Echo Show’s camera.For security features, Amazon allows you to delete your voice recordings and switch off the camera shutter when you don’t want it in use. You can read more about steps they take to protect your privacy here.

The new Echo Show 8 is made for connecting with people both inside and outside your home. The camera has had a huge glow-up and now boasts 13 megapixels (compared to the 1st gen’s 1 MP), and the Echo Show 8 offers more Alexa functionality than ever.I ran into some issues getting Zoom to work on the Echo Show 8, which was one of the main draws of the device, but other than that I’m truly impressed.