Amazon launches Inspire, a TikTok-like shopping feed that supports both photos and videos 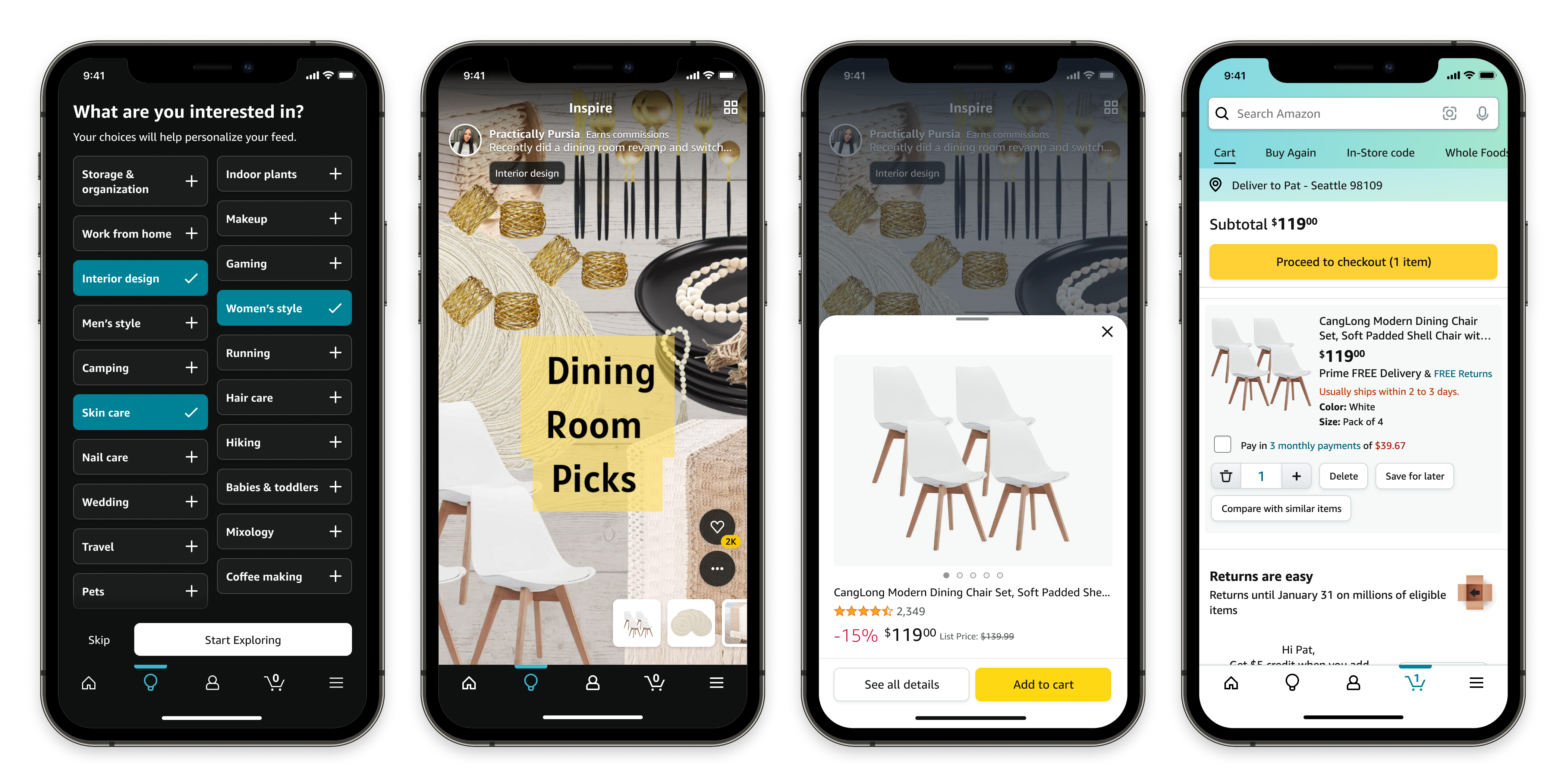 The retailer said the shopping feautre will initially roll out to select customers in the U.S. in early Decmeber, and will become broadly available to U.S. customers in the months that follow. The launch follows tests earlier this year when Amazon had been spotted experimenting with a TikTok-like shopping feed in its app, which then had its own navigation button at the bottom of the Amazon mobile app. In the version launching now, that high-level placement in the main navigation remains the same, however the Inspir feed will now be accessible with a tap of a light bulb icon instead of the diamond icon that was seen in tests. Missing Attachment To get started with Inspire, customers will open the Amazon Shopping app and tap Inspire’s icon. Upon first launch, they’re prompted to choose from over 20 interests, including things like makeup, skin care, pets, gaming, plants, hiking, interior design, travel, running, and more in order to personalize their Inspire feed. While Inspire focuses on short-form video content, it also offers support for photos, making it something of a hybrid between TikTok and Instagram. Like Instagram, you can double-tap anywhere on the screen to “like” the content with a red heart. However, you scroll through the Inspire experience much like using TikTok’s vertical video feed, where you swipe up from the bottom to see the next video. Engagment buttons are also off to the right side of the screen, as on TikTok. Missing Attachment When you see something you like, you can tap on small buttons at the bottom of the window which link to the product on Amazon. Initially, a tap on these buttons will pop-up the product in an overlay window on top of the video, but a tap on “See all details” will take you to the item’s product page where you can read more, make a purchase, or add it to a list. Over time, Amazon says the feed will better customize itself as Inspire learns more about the user’s interests by tracking their engagement. Longer-term, the retailer plans to add more shoppable features to Inspire, as well as additional in-app functionality and content, to further improve the product. Missing Attachment “We invent every day to make shopping easy and fun,” noted Amazon Shopping director Oliver Messenger in a statement about the launch. “Inspire is our new shopping experience that connects Amazon customers with shoppable content created by other customers, the latest influencers, and a wide range of brands. In just a few taps, customers can discover new products or get inspiration on what to buy, all tailored to their interests, and then shop for those items on Amazon,” Messenger said. The company has already lined up a handful of Amazon Influencers to post on Inspire, including Mae Badiyan, Practically Pursia, and others. The creators will be able to earn money from customers’ purchases via the Amazon Influencer Program. Amazon has a long history of taking a popular format from social media in order to engage shoppers and inspire purchases. In previous years, it offered a Pinterest-like feature called Interesting Finds after first testing the idea in other variations, including as Amazon Collections in 2013 then Amazon Stream in 2015. In later years, it hosted an Instagram clone called Amazon Spark, but it finally wound down that program in 2019 after only a couple of years. Spark’s primary stakeholder, Amazon VP of Consumer Engagement Chee Chew had also departed at the beginning of 2019. Unfortunately, Amazon’s takes on social media have tended to be fairly bland, as the content only exists to push products. Meanwhile, people browse social sites for more than just ideas about things to buy. They want to engage with creators, learn new things, laugh, and be entertained. It’s not clearly Inspire will be able to deliver on these factors, despite the shift to video.     Amazon launches Inspire, a TikTok-like shopping feed that supports both photos and videos by Sarah Perez originally published on TechCrunch