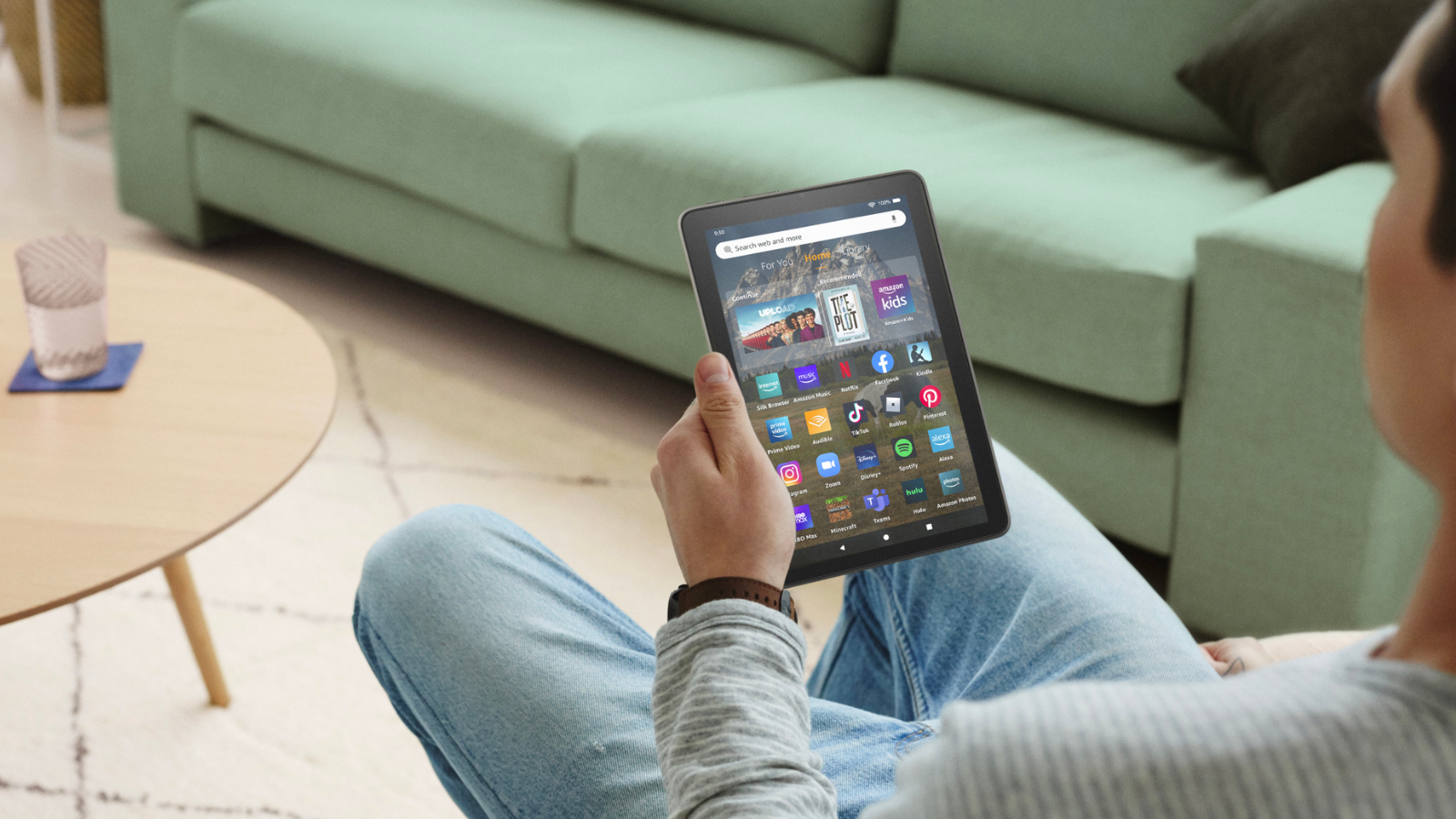 Amazon has unveiled a new line of 8-inch Fire HD tablets — and with it, the broader availability of an accessibility feature that allows customers to access Alexa via touch instead of voice.The next generation of the bestselling Fire HD 8 family includes four new models with strengthened aluminosilicate glass displays and hexa-core processors, making them thinner, lighter, stronger, and 30% faster than their predecessors from 2020 (with a $10 price hike apiece). All four are available for pre-order immediately and will begin shipping in October.The base-level Fire HD 8 (starting at $99.99) lasts for up to 13 hours at a time, adding an extra hour of battery life from the previous version, with the ability to fully charge in five hours. USB-C charging support, 2GB of RAM, and 32 or 64GB storage options (expandable by up to 1TB) carry over from the previous version. It’s available in Black, Denim, and Rose.For $20 more, the Fire HD 8 Plus adds an additional gigabyte of RAM, bumps its rear camera from 2 to 5MP, and boasts a 3-hour charge time in addition to wireless charging support. A new wireless charging dock (sold separately) will allow it to serve as a countertop smart display in Show Mode. It just comes in Black.images-5.fill_.size_2000x1333.v1663700296 Designed for ages 3 to 7, the Fire HD 8 Kids ($149.99) comes with a year’s worth of Amazon Kids+, a 2-year worry-free guarantee, built-in parental controls, and a childproof case. It comes standard in Blue and Purple, but customers have the option of upgrading to Disney Design Bundles with Mickey Mouse and Disney Princess cases for $10 extra.Meanwhile, the Fire HD 8 Kids Pro ($149.99) for ages 6 to 12 throws in access to a digital store where kids can make eBook, app, and game requests. Its case comes in three designs: Rainbow Universe, Cyber Sky, and Hello Teal.Each of the new Fire HD 8 tablets comes equipped with “Tap to Alexa,” which enables a dashboard of touch-based shortcuts to popular Alexa commands and custom requests. Instead of verbally asking the smart assistant to perform tasks — playing music or pulling up the weather report, for example — users will be able to press on-screen tiles enabled with that functionality.Previously exclusive to Echo Show devices, the Tap to Alexa feature is now available on every Fire 7, Fire HD 8, and Fire HD 10 tablet released after 2019, with added Text to Speech and Bluetooth switch capabilities for nonverbal or nonspeaking users and those living with mobility differences. “We brought Tap to Alexa to Fire tablets, along with offerings like Text to Speech, to make it easier for more people to access smart home technology,” Juliana Tarpey, senior product manager for Amazon’s Alexa for Everyone team, said in a press release. “After setting up their devices, customers can directly ask Alexa, with just a tap, to play their favorite TV show or turn on the lights, or help them communicate with friends and loved ones. “It may seem simple and it is,” Tarpey added. “It provides simpler access to Alexa’s benefits to help support all of our customers.”The American Speech-Language-Hearing Association estimates that over 2 million people in the U.S. with expressive language impairment use Augmentative and Alternative Communication (AAC), which includes handheld devices and tablets with symbols that digitally generate speech.images-1.fit_lim.size_256x-43 images-2.fit_lim.size_256x-9 images-3.fit_lim.size_256x-8 images-4.fit_lim.size_256x-5