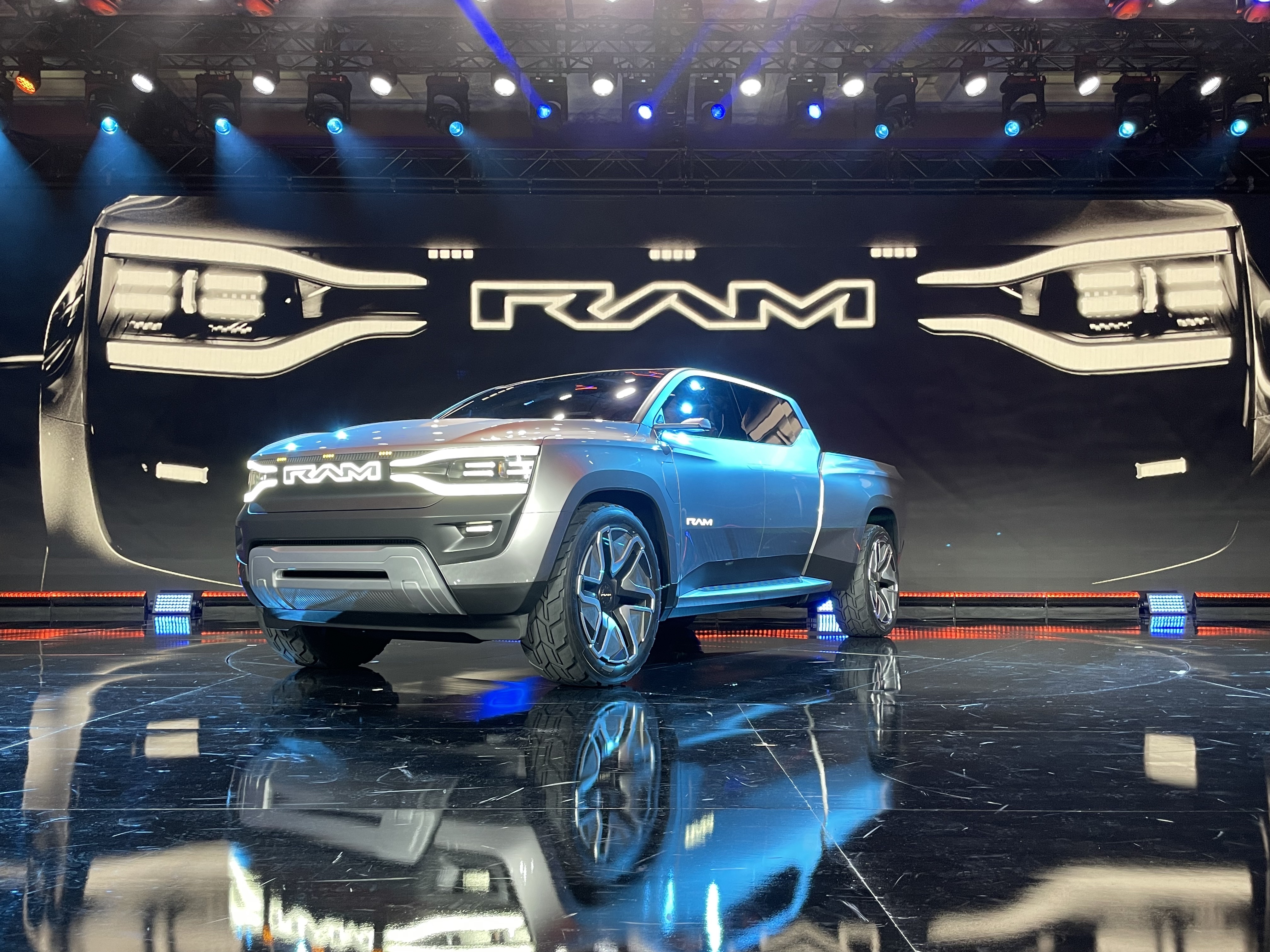 The Ram 1500 Revolution BEV concept isn’t exactly what the Stellantis brand plans to put into production by 2024. (That version will be shown later this year). Still, it provides the clearest picture yet of Ram’s plans for its next-generation of trucks and how it aims to compete with other entrants in the nascent EV truck market, including the Ford F-150 Lightning and the Chevrolet Silverado EV. It starts with a body-on-frame architecture designed for full-size EVs that integrates the battery pack as well as underbody aero panels and an active diffuser to improve the car’s aerodynamic properties. Two electric drive modules are mounted on the front and rear axles to provide all-wheel drive and a rear-axle steering system allows the driver to pivot the rear wheels up to 15 degrees. Ram didn’t reveal some important EV specs like range and battery pack size; expect those later this quarter. The brand did say that the Ram 1500 Revolution BEV Concept can add up to 100 miles of range in about 10 minutes with 800-volt DC fast charging at up to 350 kW. That, of course, suggests that the production version will have an 800-volt electric architecture that allows for speedy fast charging. The automaker did stuff a lot of features, tech and new design language into the Ram 1500 Revolution. Here’s what stood out.

IMG_6661 There are all sorts of interesting exterior design choices in the Ram Revolution such as new “face” that includes more modern badging and an animated LED tuning fork headlight design. Perhaps the most notable design feature is the lack of a B pillar, which allows for a grand saloon style door opening. The design decision makes the spacious interior look even more cavernous. The cabin is actually four inches longer than Ram’s gas-powered equivalent trucks. The saloon style doors simply hammer that idea home. Ram-Ev-1

IMG_6655 The sideview mirrors are smaller than those found on any other Ram truck, a design choice meant to reduce drag and increase aerodynamics. The sideview mirrors, which use a digital camera to capture the truck’s surroundings, are also made using 3D printed parts. The truck concept is also equipped with a backup camera and a rearview mirror that communicates with biometric cameras that observe the truck’s environment.

The truck is outfitted with multiple built-in projectors to visually communicate information to the user. But really, we care about this because the projectors also double as a mobile movie theater.

IMG_6625 The Ram Revolution concept is outfitted with a full glass roof with electro-chromatic panels and integrated roof rails. From inside the cab, occupants can use the overhead console to operate ambient lighting. They can also use Ram’s tactile swiping technology to configure the sun visors or the entire electro-chromatic roof to adjust the opaqueness.

Like so many vehicles today, the Ram Revolution has a personal assistant. A 3D Ram avatar acts as the vehicle’s face and will respond to various voice commands from users, according to Ram. One neat feature is that the personal assistant will even follow commands from the owner while they’re outside the vehicle. A user can tell the vehicle to close the windows, play music, take a picture, and “follow me” with Shadow Mode.

IMG_6652 Yeah, shadow mode, a feature that allows the vehicle to automatically follow a driver who is walking ahead of the vehicle. This feature, which using sensors and camera technology to navigate around obstacles, is being marketed to folks who might be at a job site and might want the truck to follow along and carry tools.

IMG_6632 The lower display (pictured above) can be used as a tablet, passenger display, truck bed workstation, vehicle control, or video game controller, according to Ram. The two 14.2-inch displays can also be combined to provide a larger viewing area.

ram-jump-seats What do you do with a spacious interior? Add third-row jumps seats, of course. The third row jump seats, handy for when you want to fit six-people inside the truck cab — say what? — are folded until needed for use. The jump seats are mounted to the mid-gate with a removable lower section. The interior layout is actually flexible, allowing for users to remove the center console and reconfigure seating. IMG_6621

Speaking of flexibility. The flexible layout includes a pass-through that travels through the center console and into the frunk. I’m officially dubbing this a frunk hole. This feature allows for objects as long as 18 feet to fit into the truck. IMG_6641 It should be noted that this hole is narrow. One could imagine a metal or PVC piping fitting in here or perhaps a pair of skis. Not sure if an object will fit? The concept also comes with a mobile app that helps users measure objects to determine if they can be transported with their vehicle. Users can scan the product’s barcode or use a built-in augmented reality camera measuring tool. The mobile app will show users how the object can best be positioned in their vehicle. Internal and external cabin projectors can also be used to display guides on the target storage location, according to the company.

Unfortunately, I couldn’t get a peek inside the powered front trunk, or frunk. But I was told that if you look under hood, which has one-touch open-and-close functionality, there are cup holders. (It’s a tailgating thing.) Other powered features on the vehicle includes a powered charge-port door that is located on the driver’s side front quarter panel, a powered tail gate, flush-mounted door handles, powered side steps and a powered rear step. All the tech (and other flashy features) stuffed into the Ram 1500 Revolution EV truck by Kirsten Korosec originally published on TechCrunch