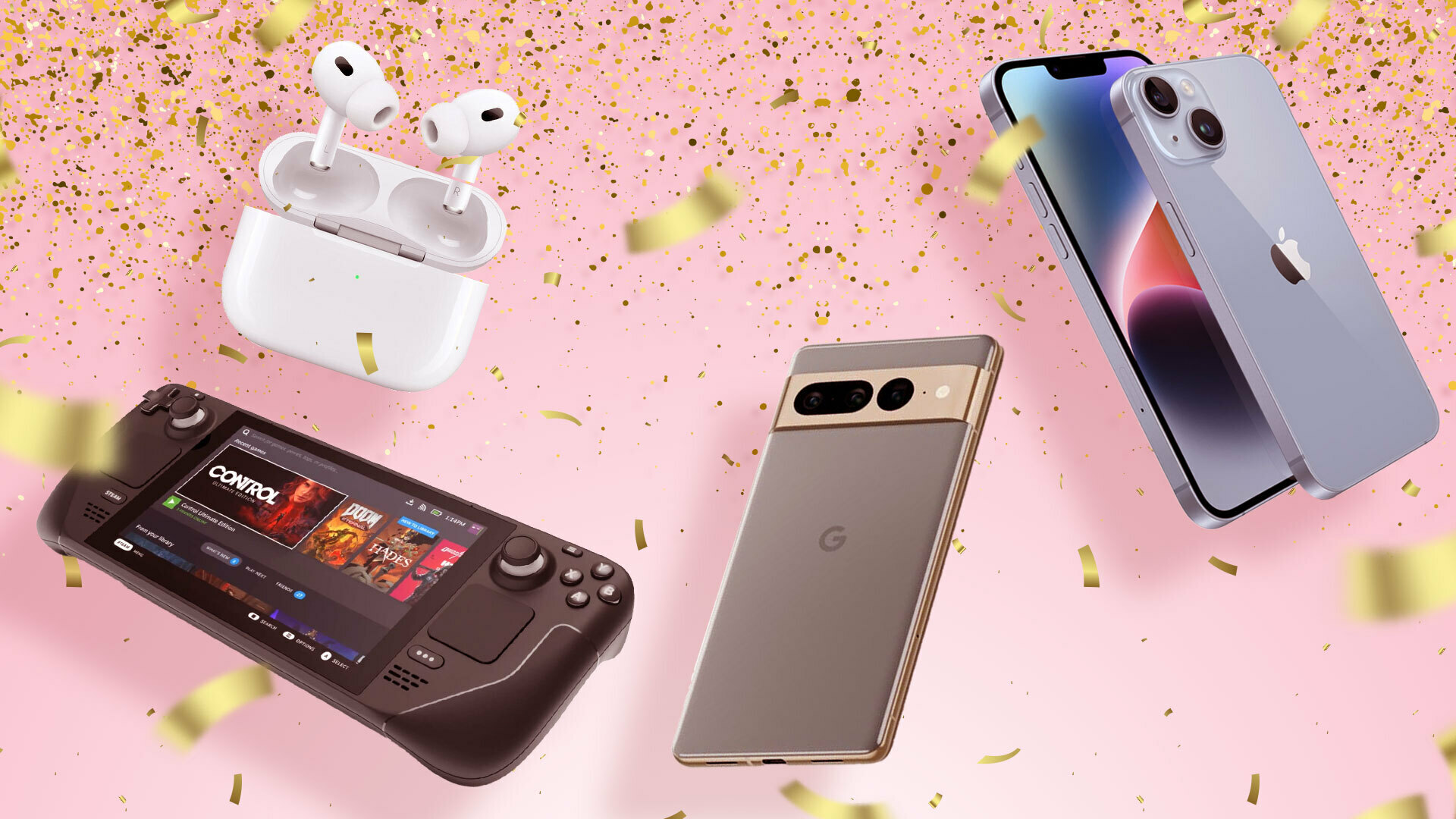 Like every year, 2022 saw plenty of tech products come and go. Not all of them managed to live up to the hype (looking at you, Pixel Watch), but the ones that did truly stood out. From the unparalleled cameras in the Google Pixel 7 Pro to the unique versatility of Valve’s Steam Deck, 2022 was a great year for gadgets that slotted right into your lifestyle, whether you’re a WFH homebody or a go-getting travel enthusiast. Without further ado, here’s the best tech 2022 had to offer.

images-1.fill_.size_2000x1125.v1670018575 While there are countless entities making amazing video games out there, the world of video game hardware is much smaller and more cutthroat. One poorly received console can be enough to kill a company’s desire to ever try again. No other gaming company has successfully managed to break up the Nintendo/Sony/Microsoft triumvirate that’s dominated the console market for the last 20 years.So when PC gaming titan Valve decided to jump into the handheld console market with the Steam Deck back in February, there was every reason to expect that it might not work. Valve’s previous hardware efforts like the console-esque Steam Machines and the oddball Steam Controller failed to find footing. Its $1,000 Valve Index VR headset has fared a bit better largely thanks to the hype around Half Life: Alyx, but VR is still a niche market. It’s pretty audacious to jump into the hardware market with something that’s going to draw direct comparisons to the ultra-popular and beloved Nintendo Switch, but Valve pulled it off.  The Steam Deck is powerful enough to play high-end PC games on the go, comfortable to hold, and has a gorgeous touch display. If that wasn’t enough, you can even install different operating systems on it and use it as a portable emulation machine for older consoles like the GameCube and PlayStation 2. There’s no other portable gaming system that offers anywhere near the level of freedom the Steam Deck provides and for that it belongs on any list of the best tech of 2022.

images-2.fit_lim.size_376ximages-3.fit_lim.size_376x File this one under “Least Surprising News of the Year,” but Google made another incredible smartphone camera. The Pixel 7 Pro is, no exaggeration, the best phone camera I’ve ever used. Google’s custom in-house Tensor chip took the Pixel 7 Pro’s software-based photo enhancements to unbelievable new heights in 2022. Sure, regular photos look fantastic in daytime or nighttime (Google’s Night Sight is still the best), but the real watershed moment comes when you use the Pixel 7 Pro’s awe-inspiring 30x zoom lens.Even when you zoom all the way in on something that’s miles away, the Pixel 7 Pro produces shots that look like you’re practically standing right next to the subject. The level of sharpness and clarity in these photos is unmatched in smartphone photography. On top of that, you can use a new macro focus feature to check out the minute details on tiny objects. Plus, it’s still got the same great Magic Eraser tool for getting unwanted distractions out of photos and a new Unblur tool that cleans up blurry images, even if they were taken on another phone.Whether you’re right next to something or far away from it, the Pixel 7 Pro camera has your back.

giphy For years, tech fiends have been wringing their hands about the notch at the top of modern iPhone displays. It technically served the purpose of slimming the bezel around the display, but it was also distracting. With the iPhone 14 Pro, Apple made the bold move of not removing the notch, but making it work for you.Now, that obstructive black spot at the top of the screen is called the Dynamic Island and it grows, shrinks, and animates all over the place to showcase notifications, music you’re listening to, and remind you of that timer you set 20 minutes ago. Apple cleverly turned a former hindrance into a feature that iPhone users can’t live without anymore.In a year where we expected the new iPhones to be mostly iterative, the Dynamic Island breathed new life into Apple’s premium handsets. That said, “Dynamic Island” won’t win any awards for having the best feature name this year.

images-4.fill_.size_2000x1125.v1670018575 Sometimes innovation isn’t strictly necessary. While Apple brought some bonafide novelty to its newest iPhones via the Dynamic Island in 2022, the same philosophy didn’t get applied to AirPods. And you know what? That’s fine!The latest AirPods Pro have the same physical design and $250 price point as the original model. They don’t have any flashy new features, but they make all the great parts of the original AirPods Pro better than before. The sound quality is still excellent, the active noise cancelation blocks out twice as much background noise as before, and the battery life can last as long as seven hours on a full charge. When Apple launched the AirPods Pro in 2019, they were the best AirPods around. It turns out not much needed to change when it came time to refresh them this past year. No need to fix what isn’t broken.

images-5.fill_.size_2000x1125.v1670018575 Rounding out the trio of Apple products on this list (Apple had a good year!) is the M2 MacBook Air. This is another product that mostly brought small upgrades to the table, but the end result is a laptop that’s absolutely dreamy to use as an everyday work machine. I should know; I’m using it right now.Apple went with a new design that brings a uniform thickness to the laptop’s body (previous MacBook Airs were thinner on one end than the other) while remaining stunningly light at just 2.7lb. Its 13.6-inch display looks fantastic, even if it loses points for being constrained to just 60Hz. And while its two paltry USB-C ports aren’t quite enough, the M2 chip powering this bad boy makes it one of the smoothest, fastest laptops around. It also doesn’t hurt that it has the best keyboard Apple has made in years, either.

images-6.fill_.size_2000x1125.v1670018575 Android owners deserve great wireless earbuds, too. Luckily, after years of iteration, Samsung finally arrived at something that works pretty great without many reservations: The Samsung Galaxy Buds 2 Pro. These awkwardly named earbuds have an adorable egg-shaped design with silicone ear tips that provide incredible comfort for long listening sessions. You can even sleep with them on. The sound quality is excellent and the ANC is truly impressive. Plus, if you use them with an Android device, you get access to a bunch of nifty customization features, like the ability to mess with a sound equalizer, remap touch controls, and enable spatial audio for 3D listening.Of course, iPhone owners are locked out of all that sweet customization. But that’s what AirPods Pro are for.

images-7.fill_.size_2000x1125.v1670361221 Sometimes earbuds aren’t enough. If you’re sitting at home and need to go truly heads-down on a project, blocking out the world around you with all your favorite jams, Sony’s $400 WH-1000XM5 headphones offered the best tool for that in 2022.Though they don’t have a catchy name or a flashy appearance (you could easily mistake them for any other pair of black headphones), these bad boys come with some of the best sound quality in town. You’ll never find yourself wishing that the volume could be just a bit higher like you might with other headphones. Plus, best-in-class noise cancelation makes them perfect for filtering out noisy kids, roommates, or coworkers in any situation.Oh, and the battery lasts for up to 30 hours on a full charge. You won’t get that out of any pair of earbuds.

images-8.fill_.size_2000x1125.v1670361221 I know, I know. It hasn’t been a banner year for Meta, between the company’s economic troubles and the lack of confidence its employees have in Mark Zuckerberg’s vision for the metaverse. You may personally find the idea of working in VR uncomfortable. However, if that is indeed the future we’re heading towards, and if you want to try it out now, the Meta Quest Pro is for you.Though its $1,500 price tag looks steep compared to the $400 Quest 2, one look at the Quest Pro explains why Meta is charging so much for it. Everything from the headset’s build to its comfort features and controllers are of substantially higher quality than the three-year-old Quest 2. On top of that, it offers full-color passthrough capabilities, making it more of a mixed-reality headset than the pure VR offerings on Quest 2.Maybe this isn’t the future of work, but if it is, the Quest Pro is a nice starting point on the journey there.